[ 26 September 2006 ] Rare Book School has recently acquired a large (15 x 18") intaglio plate, showing a head-and-shoulders portrait of a cheerful long-haired dog, engraved on steel by John C. McRae after a painting by Sir Edwin Landseer. The plate [shown below, reversed] is titled “Fritz.” The image size is 13.375" x 10.375": 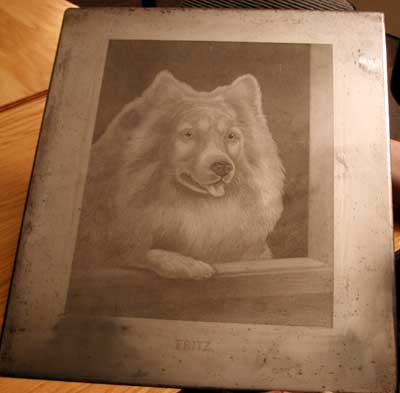 We have been unable to identify the original Landseer painting (perhaps it is a detail from a Landseer painting), and we do not know the purpose for which this plate was made: the subject seems a bit simple for a framing print, but the image size is a bit large for most magazine or book purposes. Can anyone identify the print or its source? Any information gratefully received!

[ 3 June 2006 ] A couple of months ago, eagle-eyed Vincent Golden noticed an eBay auction featuring an interesting book in a remarkable binding. The book is the fourth edition of Hymns for the Millennium, composed from the prophetic writings of Joanna Southcott and published by her order by Philip Pullen (London: Manbey, Spencer, Haggar, Essom, 1835), The small book (it is about 6" tall) is bound in cloth printed (as we suppose) to resemble mottled sheep or calf, and the effect is pretty convincing , as you can see by the accompanying illustration. 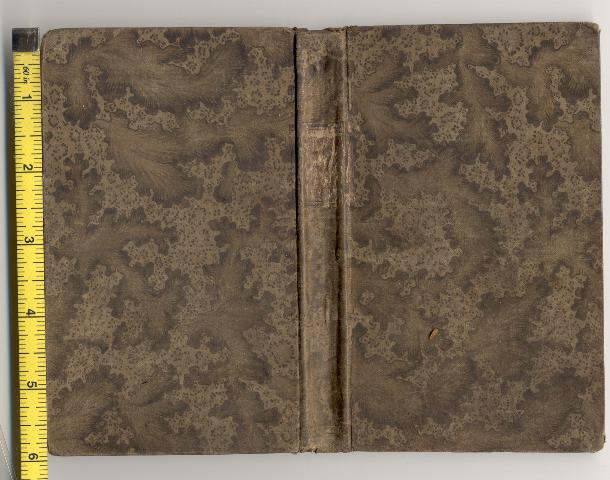 The book has the remains of a paper spine label. In her recent PBSA article on early bookcloth (100:1 [2006], pp. 25-87), Andrea Krupp reproduces (p. 32, Illus. 1: Middle) a smaller section of this printed cloth pattern, taken from an 1835 book published in New York City; but you really need to see a larger color sample to get a sense of the interest of this pattern, which repeats at a spacious 4" intervals vertically and 6.5" horizontally.

[ 10 April 2006 ] We recently added a copy of Henry Blackburn's The art of illustration (London 1894) to the RBS reference library. Blackburn informs us (pp. 21-22) that the first systematic attempt at illustration in a daily newspaper was the insertion of a weather chart in the Times in 1875, but that "in June, 1875, the Times and all other newspapers for England were far distanced by the New York Tribune in reporting the result of a shooting match in Dublin between an American Rifle Corps and some of our volunteers." To be sure, "there were long verbal reports in the English papers, describing the shooting and the results; but in the pages of the New York Tribune there appeared a series of targets with the shots of the successful competitors marked upon them, communicated by telegraph and printed in the paper in America on the following morning."

(Click on the thumbnails below to view the full-size photos.)

With advice from Vincent Golden (Curator of Newspapers, American Antiquarian Society) RBS purchased a copy of the 30 June 1875 New-York Tribune, and we were delighted with the result, held up here by Barbara Heritage, RBS Curator of Collections: the front page of the issue is dominated by no fewer than 36 relief blocks of rifle targets, advertised as "a new feature in journalism - the shots made by the riflemen ... accurately shown by cable, through a process invented by the Tribune Correspondents ... the Americans victorious."

The process probably involved laying a thin sheet of graph paper containing numbered rows and columns on top of the targets in Ireland and determining a set of coordinates for each bullet hole. The coordinates could be cabled to New York for replication on similar sheets of graph paper, transferred to individual stereotype blocks reproducing the target squares, and the indication of bullet holes punched into the appropriate positions.