Forthcoming fall and winter courses in NYC, Baltimore, and DC

[ 2 September 2008 ] This fall and winter, RBS will be running courses in New York City, Baltimore, and Washington, DC. At the Freer/Sackler Galleries at the Smithsonian Institution in Washington, DC, Ellis Tinios will inaugurate a new course on “The Art of the Book in Edo and Meiji Japan, 1615-1912,” running Mon-Fri, 20-24 October 2008. In the same week, but at the Morgan Library & Museum in New York City, Roger E. Wieck will offer his course, “Introduction to Illuminated Manuscripts,” which he will be teaching for the sixth time. In Baltimore, at the Walters Art Museum and Johns Hopkins University, Terry Belanger will give his “Book Illustration Processes to 1900” course (taught annually since 1983), and Albert Derolez will offer his “Introduction to Western Codicology” (taught most years since 1987), both running Mon-Fri, 3-7 November 2008. The Tinios, Wieck, and Derolez courses are sold out; there are still a couple of spaces open in Belanger’s course.

In January ‘09, RBS will return to Baltimore. Paul Needham and William Noel will co-teach “15th-Century Books in Print and Manuscript.” Jan Storm van Leeuwen will again offer his “Seminar in the History of Bookbinding.” In 2007, seminar topics included (among others) c16 French and German bibliophile bindings, c17 English Restoration bindings, c18 Dutch and French luxury bindings, and c19 special publishers' bindings in Europe and America. Both courses will run Mon-Fri, 5-9 January 2009.

Application forms for the fall and winter sessions are available online.

Steve Beare, Independent Scholar: “John Feely Meets Samuel Dodd: The Use of Internet Databases in Studying the History of the American Book Trades.”

Russell Johnson, Archivist/Cataloger, Special Collections, Louise Darling Biomedical Library, UCLA: “More Baby Books than You Can Shake a Rattle At: Building a New Collection for Research in the History of Infant Development.”

Richard Kuhta, Eric Weinmann Librarian, Folger Shakespeare Library: “The Future of Research and Rare Book Libraries (and What It Will Take for Them to Have a Future).” The 2008 Sol. M. and Mary Ann O'Brian Malkin Lecture. 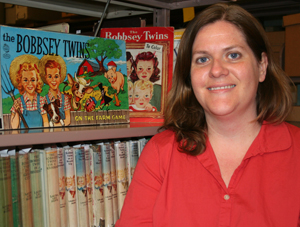 [ 10 May 2008 ] Danielle Culpepper started work as RBS's new administrator at the end of April, succeeding Carolyn Cades Engel (who has accepted a position on the program staff of the Virginia Foundation for the Humanities). As RBS Administrator, Culpepper will be responsible for supervising the school's finances, procurement, events programming, and part-time support staff.

Culpepper has a B.A. in history from Lewis and Clark College, and an M.A. and Ph.D. in history from UVa. Most recently, she was a CLIR postdoctoral fellow at the George Peabody Library, Johns Hopkins University. Her dissertation: "Court, convent, and counter reformation : Ursulines in the Farnese duchy of Parma and Piacenza, 1575-1731," examined the role of the Ursulines in the world of the Farnese, and the roles gender and religion played in a courtly society. She has taught courses on early modern European history at the University of Mary Washington, Miami University, and at UVa. 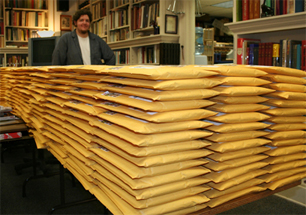 [ 9 April 2008 ] Approximately every two years since 1989, Rare Book School and its publishing arm, the Book Arts Press, have published a directory of RBS attendees, ABAA members (in alphabetical order by owner), and others with a connection to the school. The directory is distributed gratis to Friends of Rare Book School. We are pleased to announce the publication of the 10th edition of the Address Book, bigger than ever and with a number of new bells and whistles included as part of the celebration of RBS's 25th anniversary. This edition contains a new history of RBS, a list of a list of BAP/RBS lectures nos. 1-500 together with an account of this long series, a current list of ARL senior librarians. Copies of the Address Book are available to non-Friends of RBS for $30 per copy plus postage.

[ 2 April 2008 ] Association of Research Libraries (ARL) is a nonprofit organization of 123 large research libraries in the US and Canada. In recent years, the ARL has become interested in rare books and special collections, and its website contains useful material about the ARL Special Collections Task Force, the Hidden Collections initiative, and related matters.

Two years ago, the RBS staff compiled a directory of the principal librarians, curators, directors, and the like working in member institutions of the ARL. The list sets forth the names, addresses, and contact information of persons who have (or might appropriately have) the words "rare books" or "manuscripts" or "special collections" in their titles but who report to a person who reasonably does not and would not have these words in their titles.

We annually email a copy of the directory to those listed in it, in order to improve its accuracy and keep it current. We've recently completed a correction cycle, and (thanks to demon RBS webpersons Ryan Roth and Joseph Ennis) we have now mounted the directory on the RBS website and provided a geographical index to the institutions listed. Let us know if you find it useful.

[ 29 February 2008 ] In January 2008, RBS Board of Directors chairman Hans Tausig completed his second and final term on the board, as did the board's vice-chair, Peter Herdrich. RBS is grateful to them both for their many years of service to RBS. Hans Tausig has taken 15 RBS courses since 1994; he is enormously knowledgeable about the school's programs, and as the first chair of the board he made an extraordinarily effective contribution to the success of our undertakings; it has been an enormous pleasure working with him. Peter Herdrich has been associated with RBS for more than two decades; he was the director of all three Book Arts Press video presentations - From Punch to Printing Type (1985), How to Operate a Book (1986), and The Anatomy of a Book: Format (1991) - all of which still have brisk sales, by the way.

Neither Tausig nor Herdrich has seen the last of us: we hope that Tausig will join the board's advisory committee when its establishment is approved at the board's summer 2008 meeting; and Herdrich remains the chair of our development committee.

The new chair of the RBS board is William T. Buice, III (RBS board member since 2002); since 1971, he has been a partner at Davidson, Dawson & Clark, LLP, in New York; the picture shows him at RBS last July, when he and his wife Stuart took Sue Allen's course on publishers' bindings. The new vice-chair is Robert A. Gross (a board member since 2004); he is James L. and Shirley A. Draper Professor of Early American History at the University of Connecticut. The board's new treasurer, Joan Friedman, CPA, has been connected with RBS since 1983, when (as Curator of Rare Books at the Yale Center for British Art) she began to co-teach "Book Illustration to 1860: Techniques in Context" with me. Beverly P. Lynch (Professor, Graduate School of Education & Information Studies, UCLA), continues as secretary of the board.

William P. Barlow, Jr, remains on the RBS board for another year, but he has stepped down as treasurer, a position he has held since 2002. He has been connected with RBS since 1993, when he began to teach courses at the school. He will be co-teaching "Donors and Libraries" with Susan Allen at the California Rare Book School this summer; we hope that the Allen/Barlow course will alternate between the two coasts from now on. Barlow's collecting interests are well-known; but he is also the proprietor of the Nova Press, an imprint that has published a number of titles having to do with water skiing. Barlow was elected to the Water Ski Hall of Fame in 1993, and he has held practically every office there is to hold in the American Water Ski Association, including terms as president from 1963 through 1966, and chairman of the board of directors in 1966-69 and in 1977-79. He has been honorary vice-president of the Association since 1980.

[ 30 January 2008 ] James M. Reilly, the Director of the Image Permanence Institute (IPI) at the Rochester Institute of Technology (RIT) will teach a new course on The Identification of Photographic Print Processes, assisted by Ryan Boatright (also of the IPI). The course will offer instruction in the identification and dating of all the major photographic print processes. It will also touch on the evolution of photograph technology, considering the major processes in chronological order. For a full description, consult the I-35 course page.