After Print: Manuscripts in the Eighteenth Century (RBS-Mellon Conference)

This conference will bring together junior and senior scholars to explore the continued vitality of manuscript publication and circulation in the eighteenth century. Scholars now often take for granted that the eighteenth century constituted an established “print culture,” whether that culture was inherent in the technology or forged by its users. By the age of Addison and Pope, this narrative contends, the spread of print and lapse of licensing had rendered superfluous a manuscript world of scurrilous libels, courtly poetry, and weekly newsletters.

But a growing body of research is arguing for the ongoing importance of manuscript production and publication into the Romantic period, and for a critical stance that questions the solidity of the print-manuscript binary. In texts from diaries and journals to notes, letters, sheet music, scientific observations, and hybrid multimedia documents, scholars are turning their attention to the manuscript traditions and innovations that were also central to eighteenth-century literature. And they are drawing connections to our own moment of protracted media shift, focusing on aggregative, iterative steps rather than a single “revolution.”

“After Print” will join this exciting subfield by exploring a range of manuscript practices in the long eighteenth century. Margaret Ezell, distinguished professor of English and Sara and John Lindsay Chair of Liberal Arts at Texas A&M University—whose works Social Authorship and the Advent of Print (1999) and The Patriarch’s Wife: Literary Evidence and the History of the Family (1987) have been foundational to the field—will deliver the keynote lecture. For more information, please contact Rachael Scarborough King (Asst. Prof., UCSB), rking@english.ucsb.edu. See the event website for additional details.

Co-sponsored by the Andrew W. Mellon Fellowship of Scholars in Critical Bibliography at Rare Book School and the UCSB Early Modern Center. 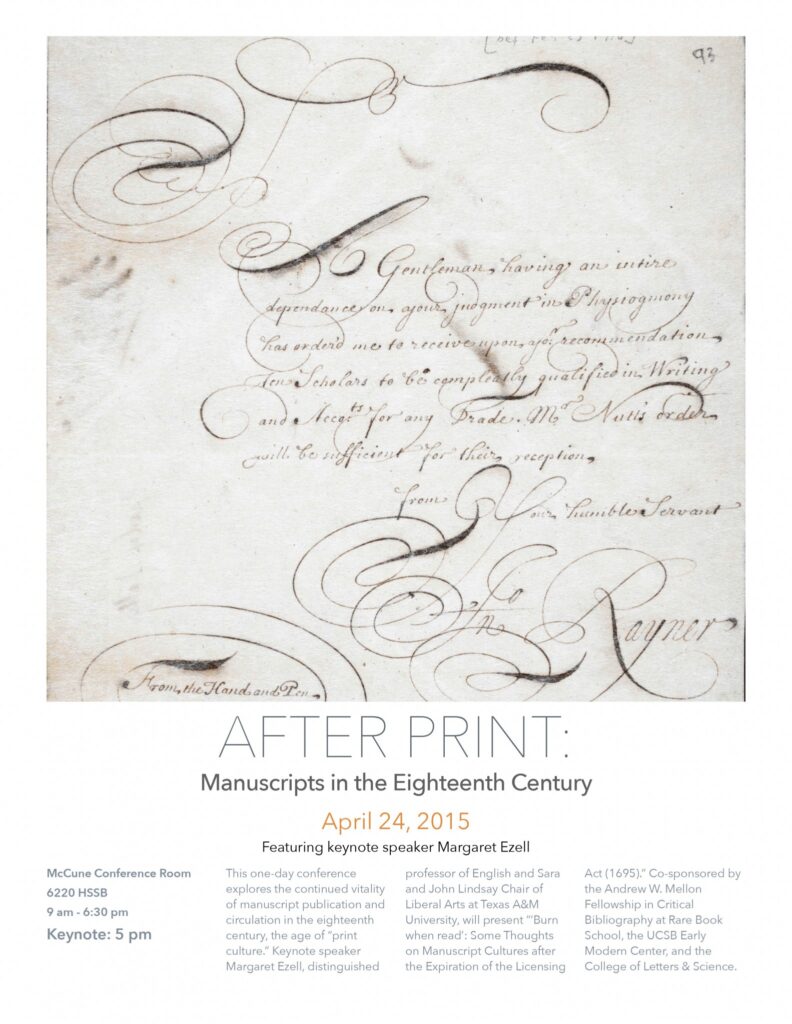