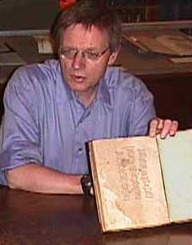 Paul Needham became Scheide Librarian at Princeton University in 1998, before which he worked at Sotheby’s and at the Pierpont Morgan Library. Among his books is Twelve Centuries of Bookbinding: 400–1600 (1979). He has given Rare Book School courses on early printed books both at the Morgan and at the Huntington.