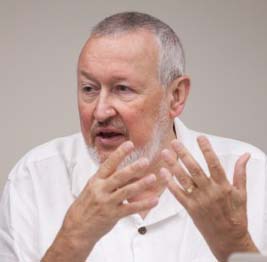 James Soren Edgren was Editorial Director of the Chinese Rare Books Project, an online international union catalogue of Chinese rare books based at Princeton University from 1991 to 2011. The project currently is being transferred to the National Library of China in Beijing, where the new International Union Catalogue of Chinese Rare Books database has been established. Edgren received his Ph.D. in Sinology from the University of Stockholm and has worked as East Asian cataloguer and bibliographer in the Royal Library (National Library of Sweden) in Stockholm, as well as having been active in the antiquarian book trade. In addition to dozens of scholarly articles, he has written the Catalogue of the Nordenskiöld Collection of Japanese Books in the Royal Library (Stockholm, 1980) and Chinese Rare Books in American Collections (New York, 1984). He delivered the inaugural Delisle lectures on the history of the book at the Bibliothèque nationale de France in 1997, and served as Associate Editor for The Oxford Companion to the Book (Oxford, 2010). In the fall semester of 2012, he began teaching a graduate seminar on The History of the Book in China at Princeton University.