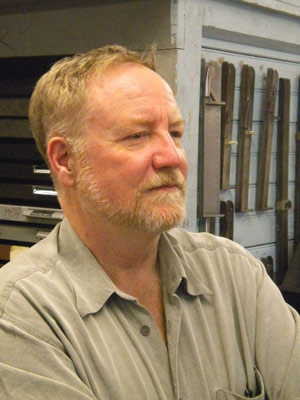 Though trained as an architectural historian, John Kristensen found his calling in printing and has for over thirty years been the proprietor of Boston’s Firefly Press, a commercial letterpress printing office and type foundry whose goal has been to apply the craft of true letterpress printing and the virtues of traditional typography to the needs and circumstances of the present day. His work has led him to study and his study to teaching, his chief interest being Boston and New England printing and printers of the turn of the twentieth century. He calls himself “the world’s last D. B. Updike wannabee.” From 1993 until 2001 Mr. Kristensen both instructed in printing and lectured on the topics of the Dartmouth College Summer Book Arts Workshops. Firefly Press hosts frequent visits and workshops for school classes and graphic design organizations, and Mr. Kristensen has delivered talks to groups as diverse the Cambridge Historical Society and Save Venice. In 2009 Mr. Kristensen delivered the J. Ben Lieberman Lecture of the American Printing History Association. He first lectured at RBS in 2010 when he spoke on “The Heavyweight Bout: Linotype vs. Monotype.” In 2011 he delivered the inaugural Charles A. Rheault Lecture of Boston’s Society of Printers. A short documentary on Firefly Press made in 2001 by Boston’s WGBH Television is by an enormous margin the most often viewed letterpress-related video on the internet.