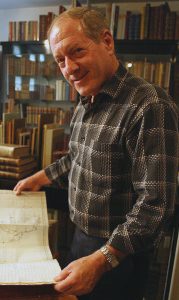 Ken is a member of the RBS Board of Directors and President of Kenneth Karmiole, Bookseller, Inc., in Santa Monica, California. Established in 1976, Ken’s antiquarian bookselling firm specializes in early printing, travel, history of printing, science and technology, and incunabula. In addition to his work as an antiquarian bookseller, Ken’s philanthropy extends to providing financial support to various libraries and the funding of educational programs in southern California including those at UCLA, The Book Club of California, and at the University of California, Santa Barbara. Since the 1970s, Kenneth has served three terms on the National Board of the Antiquarian Booksellers’ Association of America (ABAA) and received the Distinguished Alumni Award for 2011 from the UCLA Library and Information Studies Alumni Association. His article about collecting books in the digital age appeared in The Journal of the Book Club of Washington and can be found here. He joined Rare Book School’s board in 2018.

Held at the University of Virginia, this annual lecture will be free and open to the public with a reception to follow.