This course will focus on the production, distribution, and reception of books, newspapers, and other printed materials in colonial and early national America up to the 1820s. Among the specific topics to be considered are: the role of imported books, the factors limiting the spread of printing, the proliferation of newspapers and circulating libraries, the press in the Revolutionary era, the shift from printing to publishing in the 1790s, the reprint trade, copyright legislation and practice, author-publisher relations, the decentralized nature of the book trade, the rise of cooperative interregional book distribution systems, the structural flaws in the book trade, its near-collapse during the War of 1812, and its recovery and reorganization in the 1820s.

Using the resources of the Library Company of Philadelphia, students will study hands-on every aspect of the materiality of early American books; and using copies of manuscript sources they will also study the business practices of printers and publishers, and material practices of authorship and reading. Students will also be introduced to important reference works and other resources for the study of early American book history. The class will be run as a seminar, so students will be encouraged to discuss their own interests and research projects with the group as a whole.

This course is aimed at scholars, librarians, collectors, and others who are already familiar with the broad outlines of early modern book history but who wish to focus on what is specific to American book culture in the colonial and early national periods. Its chronological sequel is Michael Winship’s The American Book in the Industrial Era, 1820-1940 (H-50); and it supplements at a more advanced level the broad overview offered in The History of the Book in America: A Survey from Colonial to Modern (H-15). In their personal statement, applicants are requested to summarize briefly their background in the field, current research projects, and topics or issues that they would particularly like the course to address. 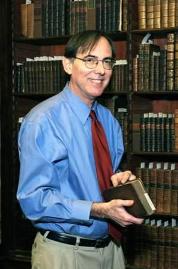 James Green is Librarian Emeritus of the Library Company of Philadelphia, where he has worked for more than thirty years. He contributed three long essays on American printing and publishing to the first two volumes of the collaborative History of the Book in America published under the auspices of the American Antiquarian Society, and he is the author, with Peter Stallybrass, of Benjamin Franklin, Writer and Printer (Oak Knoll, 2006).