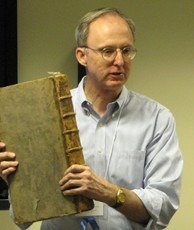 David R. Whitesell retired as Curator in the Albert and Shirley Small Special Collections Library at the University of Virginia in 2022. He previously worked as Curator of Books at the American Antiquarian Society, Rare Book Cataloger at the Houghton Library, Harvard University, and in the antiquarian book trade. He has served as Secretary of the Bibliographical Society of America and as a Trustee of the American Printing History Association. His publications include First Supplement to James E. Walsh’s Catalogue of the Fifteenth-Century Printed Books in the Harvard University Library (2006); he also was Associate Editor for Spain, Portugal, and Latin America for the Oxford Companion to the Book (2010), and Editor of Roger Stoddard’s A Bibliographical Description of Books and Pamphlets of American Verse Printed from 1610 Through 1820 (2012; winner of the MLA Prize in Bibliography). Among the exhibitions he has curated are In Pursuit of a Vision: Two Centuries of Collecting at the American Antiquarian Society (2012) and A Curator’s Wunderkammer: A Decade of Collecting for the University of Virginia (2022).